Since 1824 – History of The Milford Water Authority and Predecessor Companies 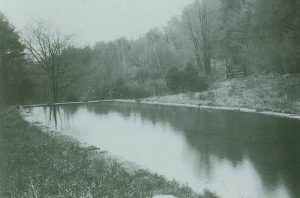 1824 – Milford was supplied with water from the Cold Spring Water Company, owned by James Barton, through hollow logs and wooden water mains.  Water bills at this time were $10 annually.

1875 – The Milford Water Company purchased the open reservoirs of the Cold Spring Water Company from Sarah Crissman for $1,600, and installed the first cast iron water mains.  They also bought 28 acres of grounds including the springs and the reservoirs.  Today the water treatment plant is located on this property.

1887 – The Milford Water Company, The Fire Company and the Government of The Borough of Milford became involved in water disputes, known as the “Water Wars”,

1903 – The Milford Water Company bought additional ground from Lucy and Herbert King for $125.

1910 – The Milford Water Company prepared the first map showing the locations of their water mains, service connections, appurtenances and equipment.

1989, April 20 – The Authority and the Pike Environmental Defenders applied for and had the Sawkill Stream upgraded to an Exceptional Value Stream to protect the springs that are the source of our water.

2000, July 17 – The Authority had its new water treatment facility dedicated and put into service with a new 548,000-gallon water storage tank.  The plant replaced the open reservoirs that were used since the 1800s.  The Authority also replaced 10,000 feet of old water mains with 6-inch ductile iron pipe.

2000, December 10 – The Authority completed and implemented its Source Water Protection Plan funded by a $100,000 grant, and based on the report by consultant Todd Giddings, professional groundwater geologist.[1]

2005 – The Authority purchased 28 acres off of Schocopee Road to help protect the springs further with the help of grants from the Army Corps of Engineers, Delaware Conservation and Natural Resources, and the Delaware Highlands Conservancy.

2007, Spring – The Authority replaced 10,500 feet of old water mains with 12-inch ductile iron pipe increasing pressure and fire protection in the Borough and surrounding townships.  The Authority also extended the water system by installing 5,280 feet of 12-inch water mains along Route 6/209 in Milford Township. This was completed with a grant from the Army Corps of Engineers.

2010-2011 – The Authority replaced an additional 9,100 feet of 8″ water main funded by a $800,000 Environmental Protection Agency Grant and a $514,000 Grant funded by the Commonwealth Financing Authority.  The completion of this project puts the Authority at 85% of its water mains replaced in a 12-year time frame.

The Authority sold its office building at 120 Pear Alley and built a new office at its treatment plant.  This finishes the Authority‘s five-year plan of having all of its operations under one roof.

2013 – The Authority upgraded all of its 740 water meters to magnetic flow technology.  The meters will give the Authority 20 years of guaranteed accuracy.  The meters also have the capability of radio read technology, which the Authority is employing on the outer fringes of its territory for safety reasons and ease of reading the meters.

The Authority joined the Pocono Source Water Collaborative to extend source water protection and education in the Pocono region.

2014 – The Authority purchased 14 additional acres of land which adjoins its land at it’s treatment plant facility.

The purchase of land strengthens the commitment of the Authority‘s Source Water Protection Program established in 2000.

The Authority extended its water mains another 1,100 feet to provide water and fire service into Westfall Township.  Three new fire hydrants were installed as part of the project.  An additional 64 new customers were added to the Authority‘s customer base.

2016  The Authority personnel replaced 1,200 feet of 8″ cast iron water mains with 8″ C-900 plastic water pipe from the treatment plant to Pine Acres Drive.  This is the #2 feed to the town of Milford which allows the Authority to shut down one main for repairs while allowing the town to still have water.

The Authority had the outside of its 548,000 water storage tank painted as part of its on-going commitment to maintaining its system.

2018  Authority staff installed 79 storz fittings to all of its fire hydrants through a $10,902 grant from Local Share Account from the Commonwealth Financing Authority gaming funds.  This will allow the fire department easier hook up to the fire hydrants to fight fires.

The Authority has built a new filtration plant and replaced all of the old water mains. It has also expanded the system in the past 20 years with minimal cost to our customers.